I get asked lots of questions about getting started with notebooking and implementing it into your homeschooling schedule. I know how overwhelming it can be trying something new and different wondering if it’s going to work. With over 9 years of notebooking under my belt (and 15+ years homeschooling in all), I can tell you that notebooking is easy to implement and is going to be worth your time and effort. Your homeschooling days will be more meaningful and fun! So, let’s get started!

Notebooking is today’s trendy educational term for the ageless discipline of keeping a journal. Kings, explorers, scientists, artists, writers, statesmen, and mothers have all kept notebooks and journals (or perhaps scrolls depending on the time period). These books are priceless in the same way your family’s scrapbook or photo album would be. They capture a very personal journey. Your child’s notebooks will do the same. They will capture his journey of learning. His notebooks will not only record the knowledge he acquires, but also capture his memories, his personality, his developing writing voice and creative talents.

Notebooking can be used with or without curriculum as well as left up to the child to determine what he wants to study for his notebook(s). Written narrations, copywork, timelines, reports, lists, observations, drawings, maps, and photographs are just some of the items that he may include in his notebook. The pages he creates for his notebooks will combine the new knowledge he has learned as well as his own personal reflections of what he has learned. The finished notebook will be a treasure for years to come as he reviews all that he’s learned and admires the elements he brought to the topics through his own writing. 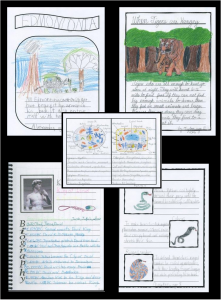 There are two primary components used in the creation of the notebook:

These two components work together to show what the child has learned. Instead of filling in the blanks of a worksheet to test what your child has learned, you give him the opportunity to show and tell what he has learned. This method requires more than memorizing a few key facts in order to later pass a test.

Notebooking disciplines your child to soak up the most important and interesting information from the subject. The pressure to perform and memorize info for the test is eliminated. Instead, he has the freedom to choose what parts he wants to study more deeply or intently. He owns the learning experience.

Unlike traditional methods, he will not soon forget what he has learned. Instead, he will own the knowledge and be able to express it to others. He becomes a storyteller, a teacher, and in some cases an expert after spending such quality time with his studies. It’s an enriching experience and one that neither of you will want to trade for your former methods of testing learning. 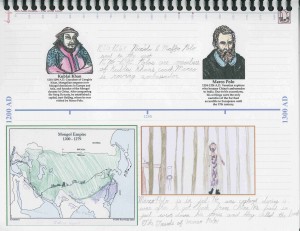 Let’s say you are doing a study of the late Middle Ages and the current topic is Marco Polo. You and/or your child will read (or watch or visit) any variety of sources on Marco Polo. From the readings, your child will orally tell back to you (narrate) what he has been read. This process of “telling back” creates mental notes of what he just learned and begins the creative process needed for writing down his narrations later. This is the basis of the written component. This written component may be expressed in a variety of ways in their notebook: through written narration(s) of any number of topics regarding Marco Polo’s life, a mini-book of interesting facts learned about Marco Polo, copywork from one of the books read and/or a quote from Marco Polo, a poem, a list of new words (with brief definitions) learned during their study, and so on.

During the study, your child will undoubtedly form mental pictures from the stories read. We want him to capture these as well. This forms the basis of the visual component. The easiest way to express this mental picture would be through some form of drawing or painted picture. In this case, he would likely also include a map of Polo’s travels. He may want to decorate his pages with borders or other clipart from the time period (or not). Other visual elements may be added: a timeline of the events in Polo’s life, a picture of Marco Polo (maybe from an online search, clipart collection, or timeline figure), a cover of an interesting book he read on this subject, a coloring page, and so on. There are no limitations to what may be included in his notebook.

Through notebooking, your child will develop a variety of skills – listening skills, narration skills, organization skills, artistic skills, and more. The combining effect of these skill is the most rewarding … to extract the most important and interesting information from a study and organize it in such a way that “teaches back” what has been learned. Some of the most influential people in history were self-taught and learned to communicate effectively. Your child will learn to do both through consistent use of notebooking.

Once a child finds his “groove” with notebooking, encourage him to explore his interests, not just his school studies. For years to come, you both will enjoy his created notebooks.

How We Began Notebooking

Please log in again. The login page will open in a new tab. After logging in you can close it and return to this page.